Termites feed on cellulose in the form of living or dead plant tissue, such as timber, grass and man-made products like paper and cardboard. They live in colonies consisting of a the primary pair (queen & king) assisted by a large number of workers together with fewer soldiers which defend the colony from predators. 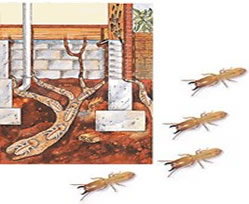 Most pest species in Australia are subterranean termites and need contact with the soil and moisture.

Their nests may be visible as a mound, or be concealed underground, in damp timber or in a tree. From the nest, workers make subterranean tunnels, sometimes more than 50m long, to remote feeding sources. Where buildings are attacked there may be more than one entry point.

Timbers vary in their susceptibility to attack, but those that are susceptible include both soft and hardwoods. Infested timber is often hollowed out.

Termite workers and soldiers resemble ants, but do not have the “waist” of an ant. Most termites are pale in colour, soldiers are usually darker in colour and have larger heads than the workers. Like ants, termites are social insects – they live in colonies. Some species build characteristic mounds, while many others live entirely underground. Termite species are commonly classed as either “subterranean”, “drywood” or “dampwood” termites. 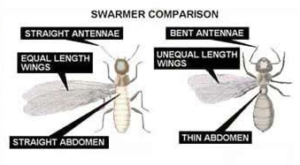 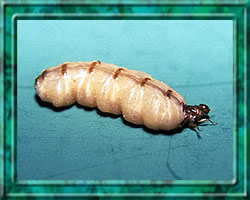 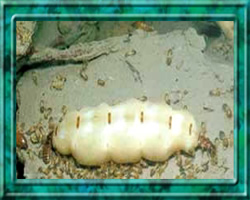 The Queen termite creates the colony by laying eggs and tending to the colony until enough workers and nymphs are produced to care for the colony. The queen termite is an egg laying machine; her body is enormous compared to her off-spring, around 3.0 cm or more, she can live more than 25 years and produce more that 1,000 eggs a day.

The King termite assists the queen in creating and attending to the colony during its initial formation. He will continue to mate throughout his life to help increase the colony size. 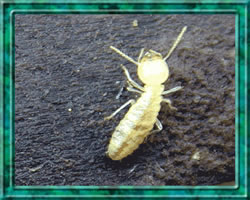 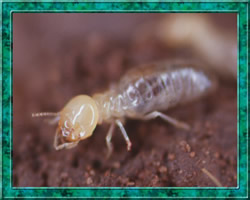 Workers represent the majority cast in the termite colony and the one that does the damage; they are a creamy translucent colour, soft bodied and carry out all work in the nest, including caring for eggs, gathering food (timber and other cellulose); constructing tunnels; repairing and enlarging the colony nest; grooming each other and feeding the soldiers, the King, Queen and also caring for the young nymphs until mature. Worker termites are 3 mm to 4 mm long, have no wings, are sterile, blind and work 24 hours a day for their life span which lasts several years in some species. 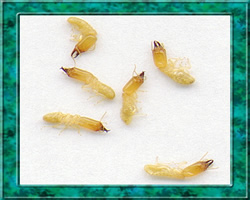 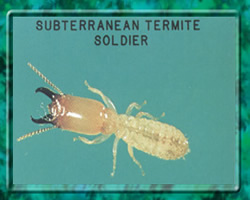 Soldiers. In strong colonies, some nymphs will develop into wingless, light-colored termites with large heads and well-developed jaws. Soldier termites defend the colony from attack by ants or other termites, in several species the soldier termite has a frontal gland that discharges a secretion of white latex from a pore in the front portion of the head. The soldiers are larger than workers but much less in numbers. They hide within the mud tubes in the nest and will not be seen unless the wood or mud tubes are disturbed. 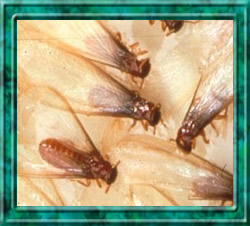 The “alates”(winged reproductives) are commonly seen when they swarm on a hot humid summer evening often before and after a storm; they have eyes; are poor fliers but are swept along by the wind; they land, drop their wings,and attract a mate by a pheromone chemical signal. If you find swarming termites, it is a sure DANGER sign that a large termite colony nest is close by and thorough inspection of the property by a termite control expert is essential. 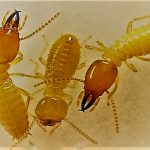 Commonly found throughout Australia – particularly in urban areas or where eucalypt gum trees are highly prevalent. Nest Location – Coptotermes acinaciformis are a very secretive termite species; they build their nest out of sight, often within the base of eucalyptus or other susceptible trees, or completely under the ground; often within an enclosed patio or under concrete on ground flooring which is ideal for moisture retention, temperature and humidity control within the termite colony’s central nest. Coptotermes acinaciformis can also construct subsidiary nests away from the main colony nest. A subsidiary nest can be contained in a wall cavity of a building where there is a reliable moisture source, for example, from a leaking shower recess or faulty guttering or rusted down pipes. Destructive Nature – Coptotermes acinaciformis are highly destructive to buildings and other timber structures. They are the most widely distributed and destructive timber pest in Australia, accounting for more than 70% of the serious damage to buildings in Australia. A single colony may consist of more than one million termites. A most voracious timber pest … one to be taken seriously.
Termite Species- Nasutitermes 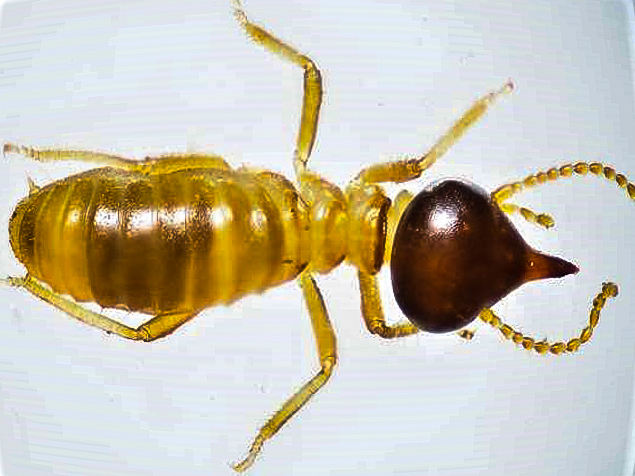 A common species that nests in coastal bushland is Nasutitermes walkeri. It forms distinctive round ball-shaped nests that are especially abundant in the years following major bushfires (as it mainly nests in stressed trees). It can also damage fences, poles and wood on the ground, but it rarely attacks buildings. This species has the largest soldiers (up to 6 mm long) of the Nasutitermes genus, with the characteristic nasute head (tapering into a long ‘nose’).

Commonly found throughout NSW, ACT, Victoria and the southern areas of Queensland and Western Australia – particularly in urban areas or where eucalypt gum trees are highly prevalent.

Nest Location – Nasutitermes exitiosus build a mound nest which protrudes 30cm to 75cm above the ground. Control can be as easy as knocking the top off the nest and a follow up insecticide treatment inside the nest.

Destructive Nature – Nasutitermes exitiosus are destructive to buildings and other timber structures. Sometimes severe damage may occur, but not so commonly as the other species listed above.

Commonly found in eastern NSW and south eastern Queensland, – particularly along the entire coast-line, the Great Dividing Range and adjoining slopes. Nest Location. Schedorhinotermes intermedius commonly build their nest in tree stumps, in the root crown of the living, dead and debilitated trees, under houses or within enclosed patios or other areas where timber has been buried or stored in contact with the soil. Identification. Major soldiers (6mm in body length) and have bulbous heads. Minor soldier (4mm in body length) have narrower heads and more slender mandibles. Destructive Nature. Schedorhinotermes intermedius are highly destructive to buildings and other timber structures. Their attack of wood in buildings at times approaches the intensity of the Coptotermes acinaciformes. They reach their food in the same way, by means of subterranean tunnels and shelter tubes. If mostly major (larger) soldiers are sighted, then they will most likely be a large colony with the potential to cause severe and rapid damage to structural timbers of a building or other timber structures.
Termite Species- Mastotermes darwiniensis 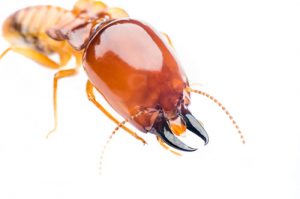 Mastotermes darwiniens is the largest subterranean termite species in Australia and the most destructive Australian species within its range of occurrence.

Nest location – they build their nest (secretively) totally below the soil surface; or in the trunks and root crowns of trees and stumps. Once a nest is mature (over 100,000 or much higher) they can “split off” to form other nests over a wide ranging area.

These sub nests are formed constantly and can sustain life for alongperiod of time without contact to the original nest.

Destructive nature – Mastotermes darwiniensis is one of the world’s most destructive termite species, often causing severe damage to houses, buildings, bridges, posts, poles, and many other plant and animal products. It is also an agricultural pest, responsible for ring barking and killing living trees, shrubs, fruit, vegetable crops, sugarcane and rubber trees. It is reported to attack rubber tyres on tractors and cause damage to leather, hide, plastic or lead-sheathed cables, bitumen, bagged salt, flour, glass and various metals. Mastotermes darwiniensis is the most ancient of all the termites in the world – they occur only in Australia – a termite to be feared. 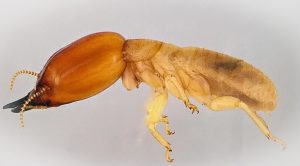 This species occur along the eastern coast of Australia, VIC, NSW, QLD and across the north to Darwin.

This Termite is a serious pest of forests.

Small colonies found in branches and trunks of trees, (often-in softer growth rings) limits the utilization of the timber.

Occur mostly in tropical areas, where the atmospheric humidity is constantly above 75 percent. The introduced and highly destructive West Indian drywood termite, Cryptotermes brevis, is rarely located in NSW, once in Sydney in the early 1980’s. Specialist eradication procedures involve wrapping the entire building in plastic and using methyl bromide fumigation.Characteristic dry faecal pellets found in workings with excavations smooth and without wet faecal stains. 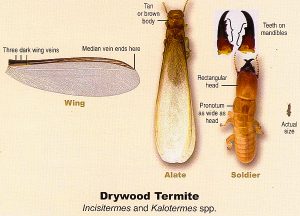 The introduced West Indian Dry-wood Termite (Cryptotermes brevis) is considered to be the world’s worst termite pest as it can eat even very small timber objects with few external signs of damage, can quickly take over from native termite species, can survive in quite dry conditions, and is easily transported. If it is found, it should be reported to the relevant government authority. It has been found in Brisbane and Sydney, as well as other areas on several occasions. 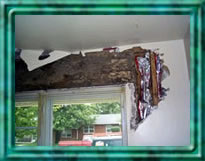 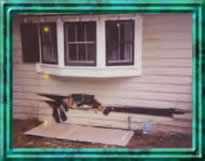 Damage to house frames may be expensive and need costly repairs; in the worst cases the house may be condemned. Subterranean termites are estimated to cost Australia $80-100 million a year in structural damage and associated pest management.

If termites are present on a property the eradication of the colony is helpful in reducing the chance of further damage to the building. We have a range of options available today to monitor the presence of termites and to eradicate them.

Although the coastal belt and northern parts of the country are generally regarded as the highest-risk areas for subterranean termite infestation, species which damage timber-in-service occur throughout mainland Australia. In practice, any structure containing wood is at risk of subterranean termite infestation – whether in the business heart of a city, in the suburbs or out in the country – unless protective measures are taken. 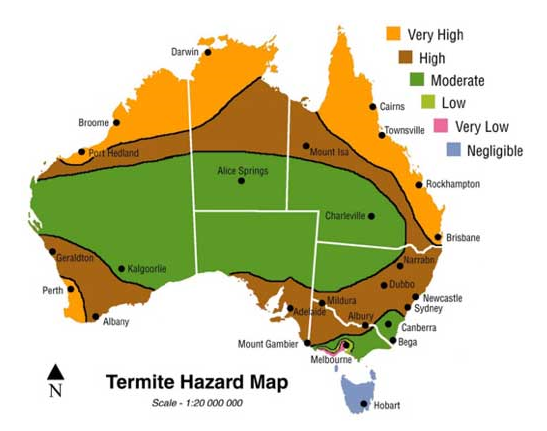 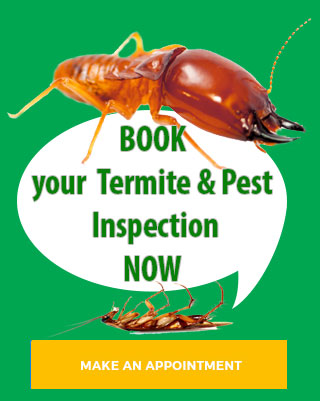 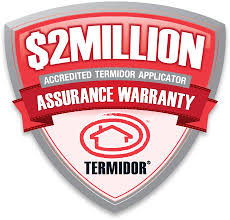